Episode #11 of the ZODIAC: A TO Z podcast titled “Perfect Crime: Inspirations” examines theories that the Zodiac imitated other elusive and notorious killers and was inspired by popular culture, fiction, film, and television, including the Batman comic books and series, TV shows such as Alfred Hitchcock Presents and Ironside, the films The Most Dangerous Game and Charlie Chan at Treasure Island, the strange case of a cab driver killing and taunting telephone calls to police, the still-unsolved murder of Cheri Jo Bates in Riverside, California, the story of the “3X Killer,” and more.

Episode #10 of the ZODIAC: A TO Z podcast titled “Melvin & Sam: The Strange Saga of a Zodiac Impostor” examines the popular myth that the real Zodiac was responsible for telephone calls to a TV talk show and to the home of celebrity lawyer Melvin Belli. A surviving victim and two police dispatchers who talked with the real Zodiac all agreed that the caller known as “Sam” was an impostor, but decades of confusion and popular myths in the books written by Robert Graysmith and the film adaptation by director David Fincher left some people convinced that the real Zodiac was responsible for the telephone calls to the TV show as well as later calls to Belli’s home. As usual, the facts tell a very different story.

Episode #7 of the new podcast ZODIAC: A TO Z features an examination of the still-unsolved murder of Cheri Jo Bates in Riverside, CA, and the possible connection to the Zodiac. Episode #6 includes an extended interview with Mike Morford (Host of the podcast Criminology and owner of ZodiacKillerSite.com) about the Bates case, the theories about her murder, the so-called “prime suspect,” and the Riverside writings linked to the Zodiac. Listen to full episodes, bonus clips, and trailers for free on iTunes, Apple podcasts, and Spotify.

>> ZODIAC: A TO Z is now available from iTunes: CLICK HERE <<

Listen to trailers and full episodes of ZODIAC: A TO Z at ZodiacAtoZ.podbean.com

Episode #5 of the new podcast ZODIAC: A TO Z features an extended conversation with writer and producer DAVID EICK (Battlestar Galactica, Steven Spielberg’s Falling Skies) about the Zodiac’s last known murder in San Francisco, and the killer’s influence on pop culture, including the legendary crime thriller Dirty Harry and the horror film The Exorcist III, in part 2 of “Hollywood Horror.”

50 years ago, the Zodiac killer threatened to kill a dozen people if Bay Area newspapers refused to publish his coded message on August 1st, 1969. 50 years later, the cipher known as the “Z408” remains one of the greatest true crime puzzles in American history. The new podcast ZODIAC: A to Z looks at the beginning of the Zodiac story and the killer’s first cipher, featuring an extended interview with David Oranchak, ZodiacKillerCiphers.com. 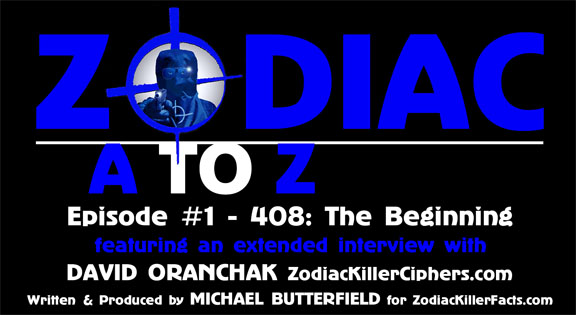 CLICK BELOW to listen to the trailer for the new podcast “ZODIAC: A to Z – 408: The BEGINNING.”

The “Zodiac” mystery is the subject of a 15-episode podcast titled MONSTER: THE ZODIAC KILLER – Click here to learn more.