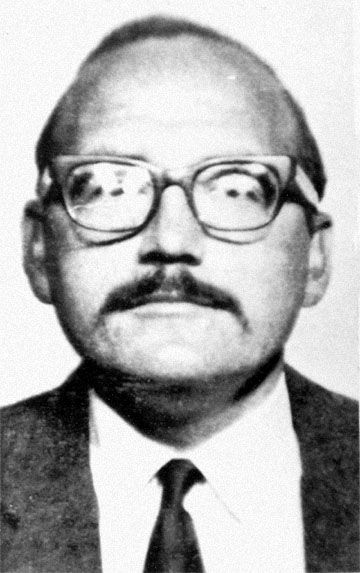 * A version of this entry was originally posted four years ago on the fortieth anniversary of the last known Zodiac crime, the murder of Paul Stine. When writing that blog entry, I hoped that I would have no need to write again about our failure to identify Stine’s killer. I hoped that future anniversaries would mark the end of this mystery and celebrate a final justice for Paul Stine. Sadly, yet another anniversary passes without answers. Time continues to deny Paul Stine the justice he deserves while we continue what sometimes feels like a futile search for answers. I will continue to hope that next year will be different, marking the end of this tragedy and justice for Paul Stine and all of the Zodiac victims.

In Memory Of Paul Stine: No Justice For The Dead 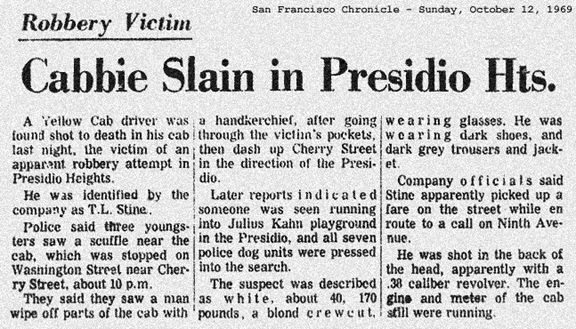 At the time, police believed that the victim, Paul Stine, had been killed during a routine robbery. No one knew that Stine’s murder would become one of the most infamous crimes in American history and that his killer would escape justice for decades.

On the night of October 11, 1969, Paul Stine climbed into his taxi cab to begin his night shift. He undoubtedly planned to finish his work and then return to his loving wife, his quiet home, and the rest of his life. Unfortunately, Paul Stine stopped on a San Francisco street to pick up a man in need of a ride. The man directed Stine to an upscale neighborhood known as Presidio Heights. Unbeknownst to Stine, his passenger was a murderer who called himself the Zodiac. While the man may have given Stine the impression that, once they reached the designated destination, he would simply pay the fare and go on his way, the man had other plans; he lied to Stine, knowing full well that he planned to execute the driver who was only doing his job.

Minutes later, Stine’s lifeless body lay in the front seat of the cab, his lifeblood escaping through the gunshot wound in his head. Perhaps Stine thought he was just going to be robbed and the gunman would then flee, or maybe Stine realized that he was about to die. No one knows his last thoughts as he may have seen his killer raising the gun to strike. Perhaps his entire life flashed before his eyes, as the movie-cliche goes. Perhaps he thought about his wife, or the children he would never raise. Maybe he thought about all he had hoped to accomplish. In that final moment, Stine may have wondered why the man wanted to kill him. When Stine pulled up to that curb and picked up his passenger, he planned to do his job and take the man where he wanted to go. In short, the passenger could trust Stine to do the right thing. Sadly, Stine had no such luxury, and his passenger was a murderer who lied in order to gain Stine’s trust just long enough to take his life.

For many, Paul Stine is just a body in the now-famous crime scene photograph, forever trapped in time, immortal yet devoid of life. Like all of us, Paul Stine was concerned about his future, even though he would never have one. In order to pay his way through college, Paul Stine worked a variety of jobs. Education meant a chance for a better life, a hope that he and his wife might live in some semblance of comfort and security. Decades after his senseless murder, the killer remains unidentified and his true motives remain unknown. The murderer enjoyed his freedom while his victim was frozen in that photograph, lost to history. Like all victims, Paul Stine deserves justice.

* MYSTERYQUEST: Paul Holes and the Murder of Paul Stine