The psychology and personality of the Zodiac killer have been the subject of speculation and debate for decades. Profilers, psychologists, and arm-chair detectives have weighed in with various theories regarding the killer’s mind and motives. The popular portrait painted the Zodiac as a loner who was incapable of holding a steady job or maintaining any meaningful relationships with women. The same portrait was offered by experts who described the personality of other notorious serial killers such as the Green River killer and the B.T.K. strangler. Like the Zodiac, both GRK and BTK had killed and then disappeared for decades. BTK also telephoned authorities to report a murder and he sent several communications during his criminal career. The experts believed that GRK and BTK were also loners who were incapable of maintaining regular employment or relationships with members of the opposite sex.

FBI profilers and criminal profiling have become a part of pop culture. Many people who watch popular television shows such as CRIMINAL MINDS and PROFILER have come to believe that profiling is an exact science which can and does identify a specific type of individual as the perpetrator of a particular crime. However, history has proven that criminal profiling is largely guess-work, and the profiles are only as good as the person who prepared that profile. Further, an experienced profiler can examine the evidence and create a perfectly logical profile based on facts only to discover that the profile was completely wrong once the real perpetrator is identified.

After many years of hunting the BTK strangler, Wichita detectives turned to the experts and profilers for help. Some investigators believed that BTK was responsible for the murder of a young woman while others were absolutely convinced that the elusive killer was not involved in that crime. The experts examined the cases and conclued that BTK was definitely not responsible for the woman’s murder. Then, in 2004, BTK resurfaced and sent his first communication in 25 years. The killer’s package contained photographs he had taken during the murder of the woman in question, thereby refuting the conclusions of the experts. BTK was subsequently identified as Dennis Rader, a 59 year-old Animal Control worker. Rader again defied the experts– he was married, fathered children, maintained a steady job and served as the president of his church. When authorities finally identified the Green River killer as Gary Ridgway, he did not match the criminal profile created by famous profiler John Douglas of the FBI’s Behavioral Science Unit. [To read more about the differences between Rigway and the GRK profile, visit the website karisable.com.]

During the original Zodiac investigation, detectives explored the mind and methods of the killer, and sought the advice of a psychiatrist at the California Medical facility in Vacaville. After examining the writings of the Zodiac, the psychiatrist concluded, “He is probably a guy who broods about cutoff feelings, about being cut off from his fellow man.” Vallejo Police Captain Wade Bird speculated, “I think he’ll prove to be a genius who got so far out he went over the edge… I don’t believe a man this disturbed could hold down a steady, regular job. He’s too far gone for that.”

Dr. Lawrence Z. Freedman, chairman of the Institute of Social and Behavioral Pathology at the University of Chicago, studied the Zodiac’s words and deeds in order to understand the mind of the murderer. Freedman concluded that the Zodiac committed his crimes because he was “overwhelmed with terror,” and “spreads terror because he leads a terror-dominated life, and he insists on his power because he feels powerless. He will be caught because he wants to get caught.” Freedman said that the killer’s behavior indicated he was most likely insane and suicidal. “In his suicide, he will be expressing finally what his homicides have meant to him. To those who gave him being but denied him affection or recognition, he is saying, however insanely, ‘Look at what you have done to me.’” Freedman believed that the killer targeted couples and “has struck out in savage rage against those who seem to flaunt an intimacy that he craves with an intensity which only the fantasy of the deeply frustrated human being can imagine.”

Another psychological assessment of the killer’s personality appeared in the October 21, 1969 edition of The San Francisco Examiner. The headline read, “Zodiac’s Graph: Impotent, Shrewd and Paranoid,” and the accompanying article presented a portrait painted by William F. Baker, a handwriting expert armed with thirty five years of experience and master’s degrees in psychology and abnormal psychology. 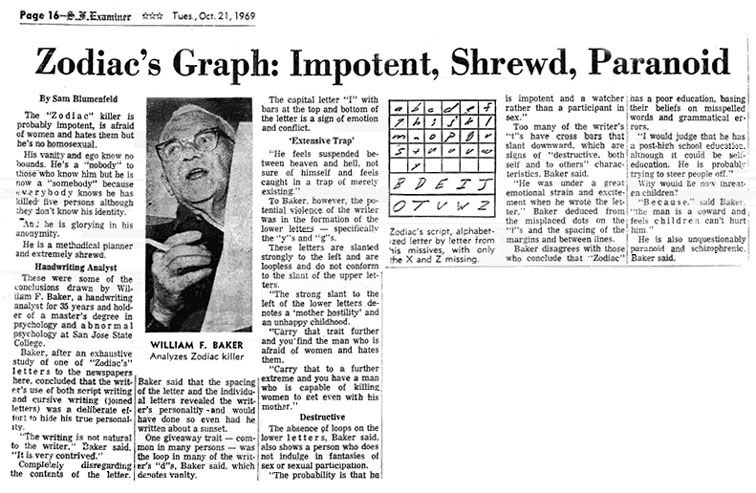 In an interview with reporter Sam Blumenfeld, Baker offered his insights after what he called an “exhaustive” study of the Zodiac’s writings. “He feels suspended between heaven and hell, not sure of himself and feels caught in a trap of merely existing.” Baker explained how certain characteristics in the killer’s writing revealed more about his state of mind. “The strong slant to the left of the lower letters denotes a ‘mother hostility’ and an unhappy childhood. Carry that trait further and you find the man who is afraid of women and hates them. Carry that to a further extreme and you have a man who is capable of killing women to get even with his mother.” Like others before him, Baker speculated about the Zodiac’s possible feelings of inadequacy and his psycho-sexual compulsions. “The probability is that he is impotent and a watcher rather than a participant in sex.” Baker told Blumenfeld that the killer was most likely not a homosexual but that he was unquestionably paranoid and schizophrenic. The analyst then contradicted the opinion of many others who believed that the Zodiac’s childish scrawl and rampant misspellings were evidence that the writer was an uneducated man. Baker viewed the letters as proof that the killer was actually a shrewd and methodical planner attempting to mislead authorities. “I would judge that he has a post-high school education, although it could be self-education. He is probably trying to steer people off.” Baker also believed that the Zodiac had altered the style of his handwriting when he penned the letters. “The writing is not natural to the writer,” Baker concluded, “It is very contrived.” When asked why the Zodiac had changed his tactics and threatened school children, Baker said, “Because the man is a coward and feels that children can’t hurt him.” Regarding the eternal question about the motive behind the killer’s seemingly senseless violence, the expert offered a familiar and tragically simple answer; the Zodiac killed because he was “a nobody,” yet his crimes and publicity made him feel as if he had become “a somebody.”

In the early 1990s, retired Vallejo detective George Bawart contacted psychologist Larry Ankron of the FBI’s Violent Criminal Apprehension Unit in Quantico, Virginia. Ankron was “informed of the investigation by Detective Armstrong in 1971.” The Quantico psychologist told Bawart that the Zodiac “killings would probably still be continuing” if the killer was not deceased or imprisoned. He stated that most serial killers would “keep souvenirs or trophies from these criminal acts… so they can keep these in a hidden place and relive the incident many times over.” Dr. Ankron added that such killers would often store these trophies, along with “journals and news clippings of the crimes themselves,” in “ingenious hiding places within their residence such as, false walls, hidden safe, etc.” Bawart was also advised that it was possible that a serial killer might “have a storage place at another location.” 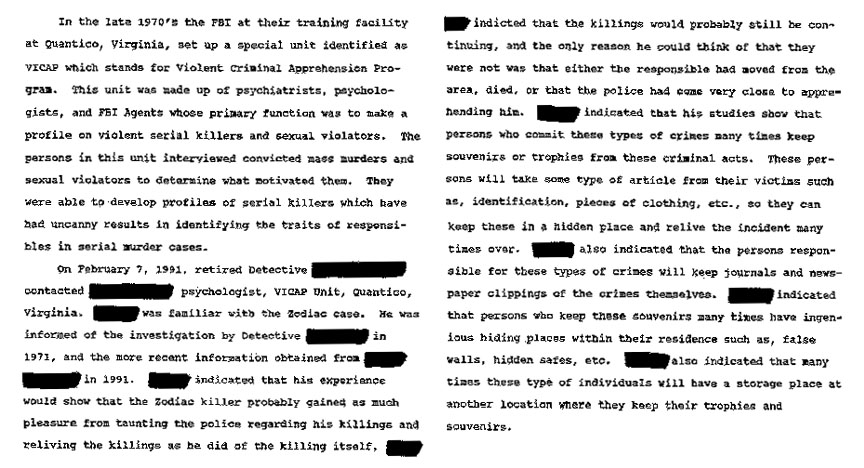 In 2001, violence expert Michael D. Kelleher and psychologist David Van Nuys offered a new portrait of the Zodiac in the book THIS IS THE ZODIAC SPEAKING: Into the Mind of a Serial Killer. The authors reached a controversial conclusion– that the Zodiac suffered from multiple personality disorder. Kelleher’s books are available at Amazon.com, and Van Nuys often posts videos featuring his analysis of the Zodiac on YouTube.com.

The producers of the 2007 motion picture ZODIAC consulted Sharon Pagaling-Hagan, a criminal profiler with the California Department of Justice, and the DVD release of the director’s cut of the film included the featurette titled “Special Agent Sharon Pagaling-Hagan’s Behavioral Profile of the Zodiac.” Pagaling-Hagen examined the Zodiac case at various times throughout her career, studied some of the original police reports, and consulted with some of the original investigators. The profiler believed that the Zodiac’s letters indicated that building the Zodiac persona was more important to him than the act of killing. After reviewing the Zodiac letters many times, Pagaling-Hagen admitted that she had changed her mind about what may have happened to the Zodiac after he vanished from the public spotlight. She now believes that the Zodiac’s last known letter, the so-called “Badlands” letter, indicated that the killer’s view of himself had changed. By signing the letter “a citizen,” the Zodiac had essentially re-joined society, satisfied by with his criminal accomplishments and content that he had achieved the fame he craved. [To watch a video of Pagaling-Hagen describing her conclusions, visit the website www.zodiacmovie.com, click on the link titled “Download & View Exclusive Behind the Scenes Interviews & Footage.” Once that page loads, then click on the link to “Behavioral Profiling.”]