“I have no sense of direction.”
— Robert Graysmith, interview with FOX 51 TV, KFXX, East Texas, November 2012

Author Robert Graysmith is known as “the expert” on the still-unsolved “Zodiac” murders, and his books are frequently cited by the media as “definitive accounts” of the case. Reporters and the author’s fans often claim that Graysmith conducted “meticulous” research, yet an examination of his books– Zodiac and Zodiac Unmasked– proves otherwise. While Graysmith’s version of the story is riddled with factual errors regarding the crimes, the evidence, and more, the facts demonstrate that he is also in error regarding the locations of many Zodiac events.

In this segment of the audio webcast program ZODIAC: A to Z, writer Michael Butterfield and noted Zodiac researcher Ed Neil explain the geographic errors contained in Zodiac and Zodiac Unmasked and discuss Robert Graysmith’s Crooked Compass. Recorded in 2007, this 7-part webcast examines the author’s many errors concerning the location of the crime scene on Lake Herman Road, the crime scene at Blue Rock Springs Park, the location of the pay phone used by the Zodiac to call the Vallejo Police Department, the crime scene at Lake Berryessa, the location of the Zodiac sighting on the night of his last known murder in San Francisco, the author’s infamous “hidden road” in Vallejo, and his claims regarding the Zodiac’s Mt. Diablo map. This audio webcast is accompanied by illustrations, maps, aerial photographs, and excerpts from Robert Graysmith’s books. 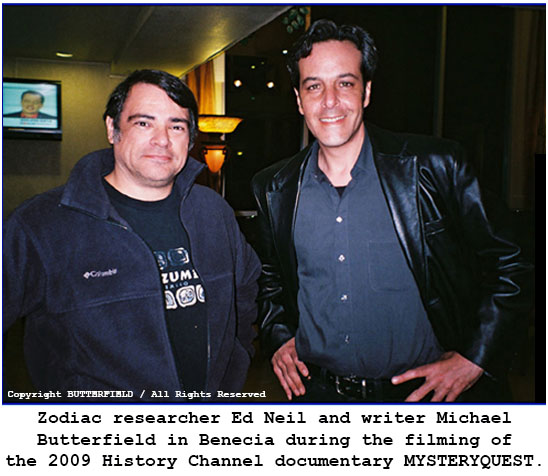 Click on the links below to listen to the audio segments or scroll down for
audio links with a fully illustrated version of this show. 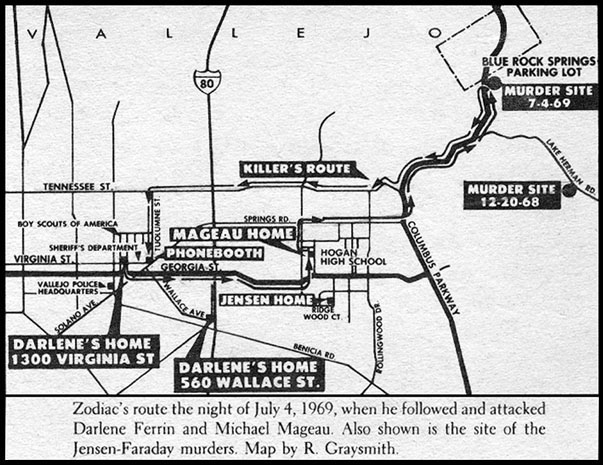 In the illustration above from ZODIAC, Robert Graysmith places the Lake Herman Road crime scene far west of the correct location as shown in the aerial photograph below. 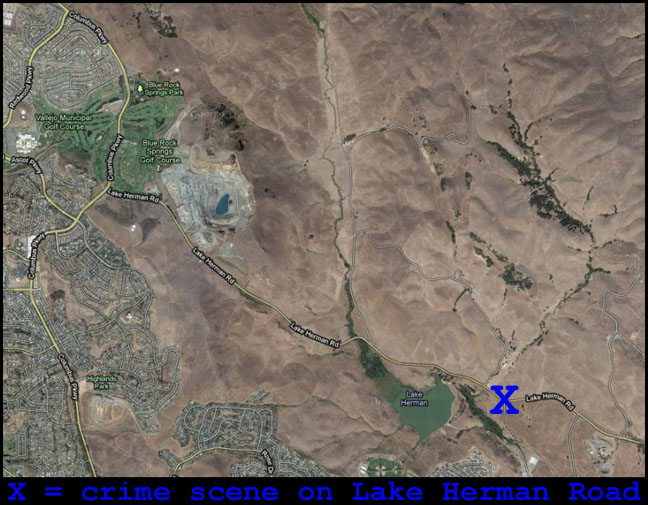 In the illustration from Robert Graysmith’s book Zodiac, the author correctly marked the crime scene at Blue Rock Springs Park, located across the street from the Blue Rock Springs Golf Course. However, in the excerpt from his book (below), the author stated that the shooting took place at the golf course. 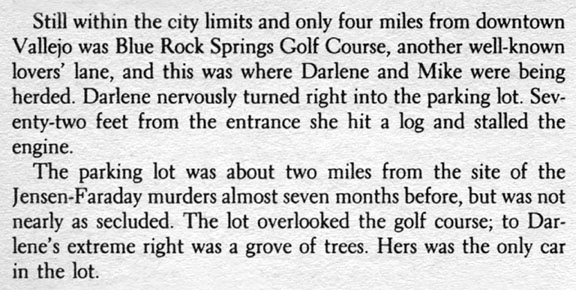 The aerial photograph below shows the correct location of the shooting at Blue Rock Springs Park, and its geographic relationship to the scene of the Zodiac’s first shooting on Lake Herman Road. Graysmith’s placement of the Lake Herman Road scene was also incorrect in his map illustration in the book Zodiac. 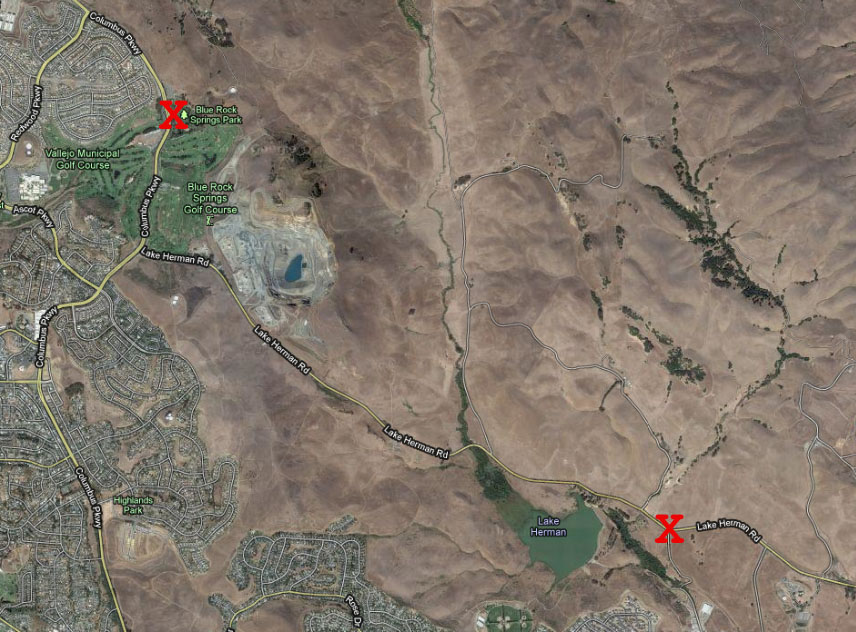 ZODIAC: A to Z : Part 3: Blue Rock Springs: The Pay Phone
On page 33 of Zodiac, Robert Graysmith claimed that the Zodiac used a pay phone “located right in front of the Vallejo Sheriff’s Office.”

The aerial photograph below shows the correct location of the pay phone used by the Zodiac, located near the intersection of Tuolumne Street and Springs Road. 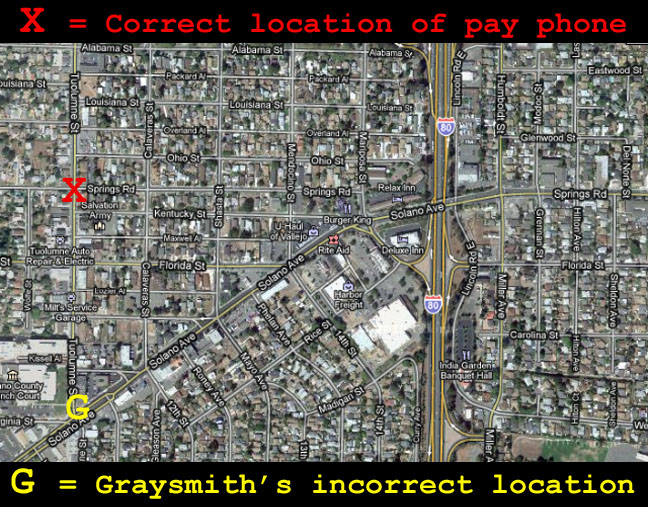 ZODIAC: A to Z : Part 4: Lake Berryessa: Shale Point or Twin Oak Ridge? AND The Zodiac Sighting in SF 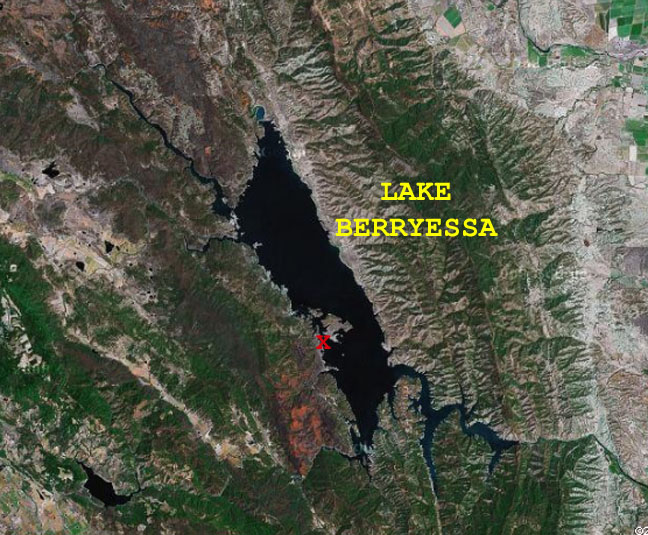 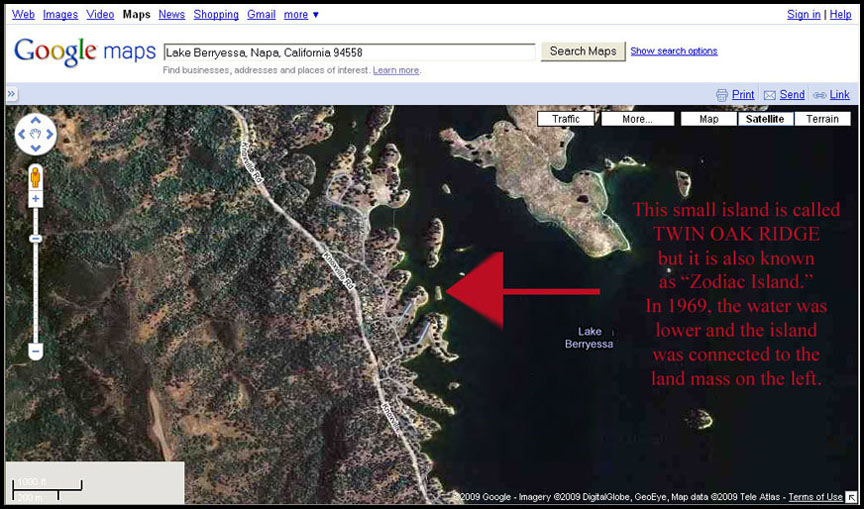 In his book Zodiac, Robert Graysmith incorrectly marked the location of the Zodiac’s attack at Lake Berryessa; his map indicates that his location is Shale Point. 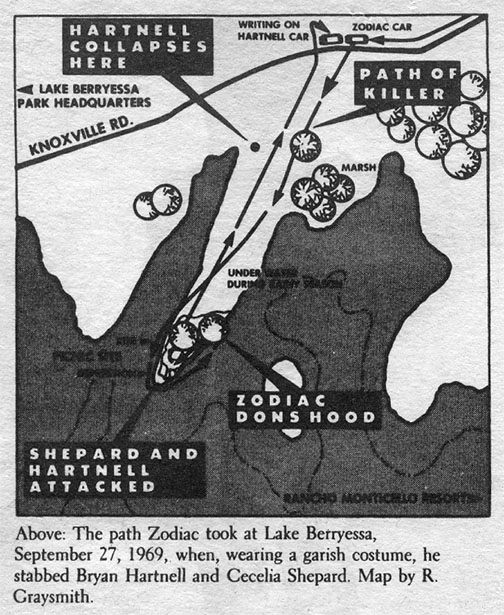 The correct location is further north at Twin Oak Ridge. 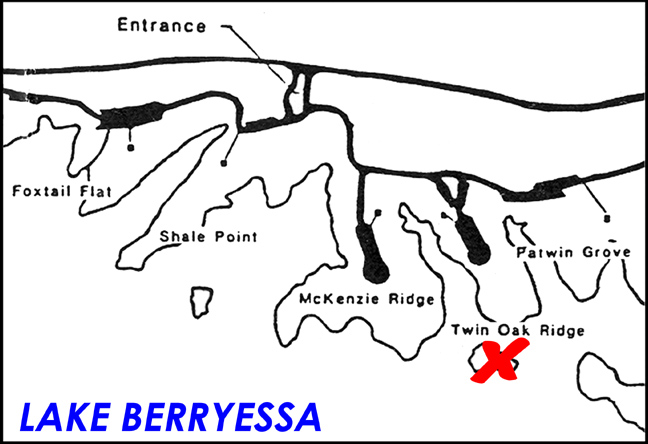 In his book Zodiac, Graysmith presented his own map of the crime scene and surrounding area of Presidio Heights, where the Zodiac murdered cab driver Paul Stine and fled on foot. Shortly after he left the scene, the killer was seen by two police officers in a passing patrol car. Graysmith marks the locations of these events on his map. 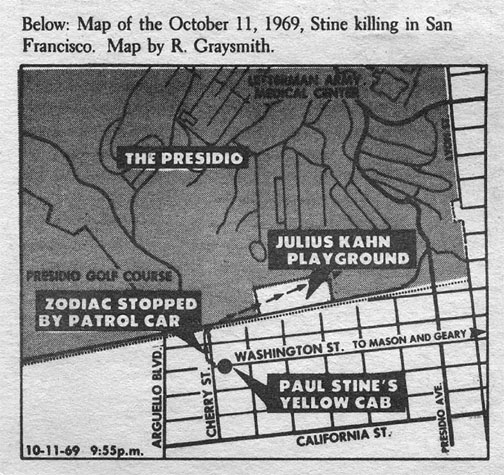 On page 85 of Zodiac Graysmith provided the following description of the Zodiac sighting. 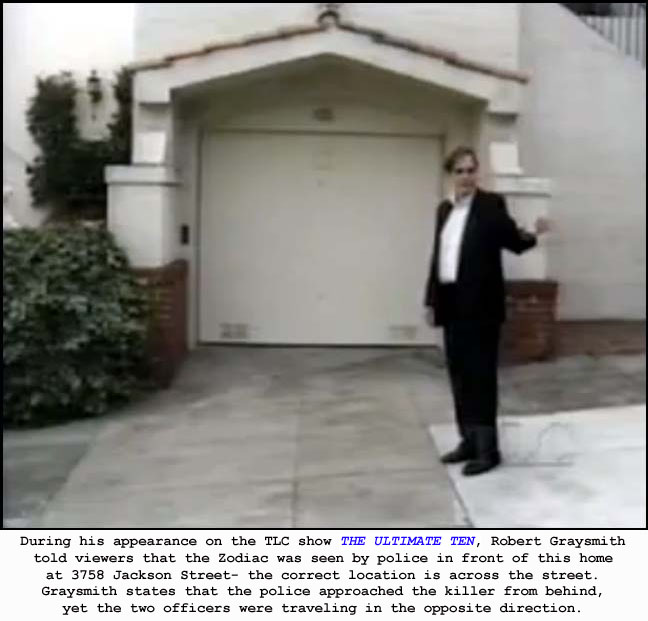 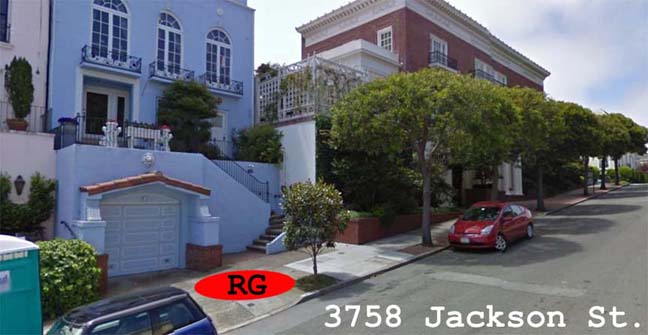 The aerial photograph below shows Graysmith’s incorrect placement of the relevant locations, as well as the correct location of the Zodiac sighting. 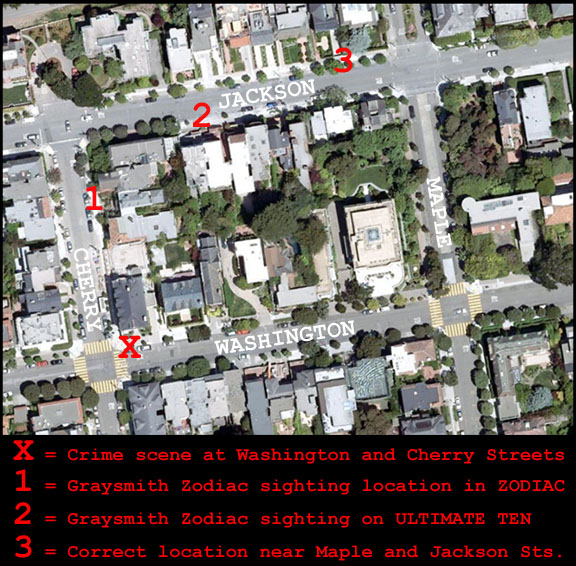 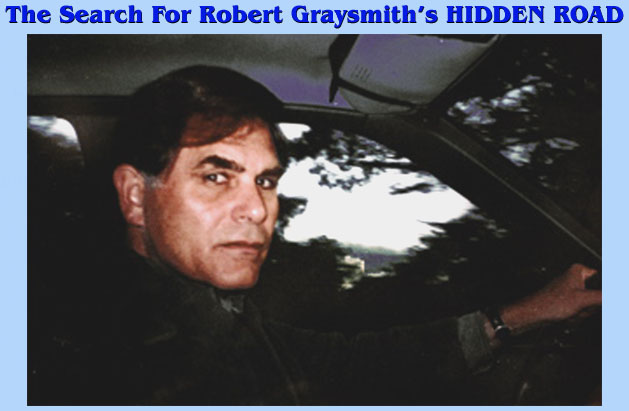 ZODIAC: A to Z : Part 5: Graysmith’s “Hidden Road”
In his second book, Zodiac Unmasked, Graysmith claimed that he had discovered a “hidden” road which led from the crime scenes to the home of his suspect, Arthur Leigh Allen. 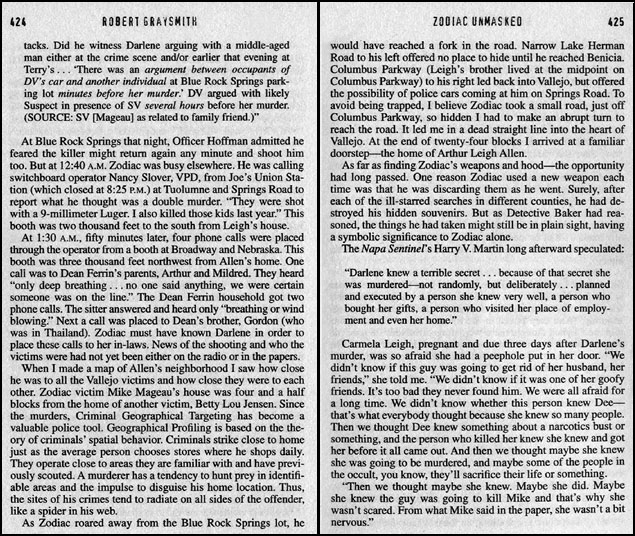 ZODIAC: A to Z : Part 6: Mad Magazine and The Mt. Diablo Map
In Zodiac Unmasked, Robert Graysmith makes a rather strange and confusing claim regarding the Zodiac’s Mt. Diablo map, the scene of the suspected Zodiac murders near Santa Barbara in 1963, and the famous “fold-in” page of MAD magazine. 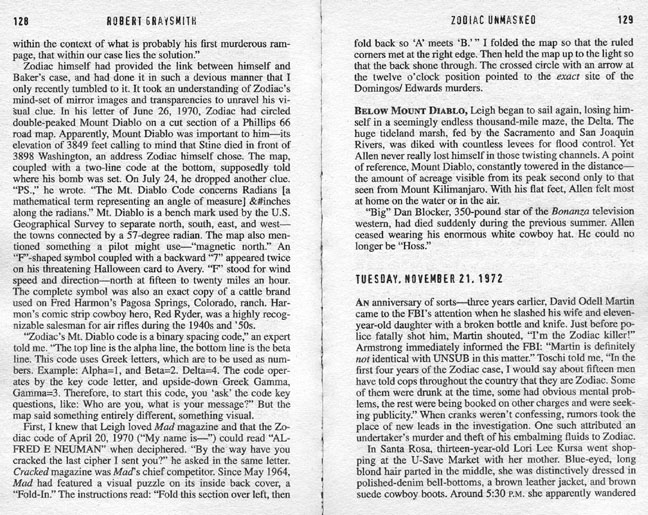 MAD magazine’s “fold-in” page featured an elaborately designed image which would transform into a second image once the page was folded inward. 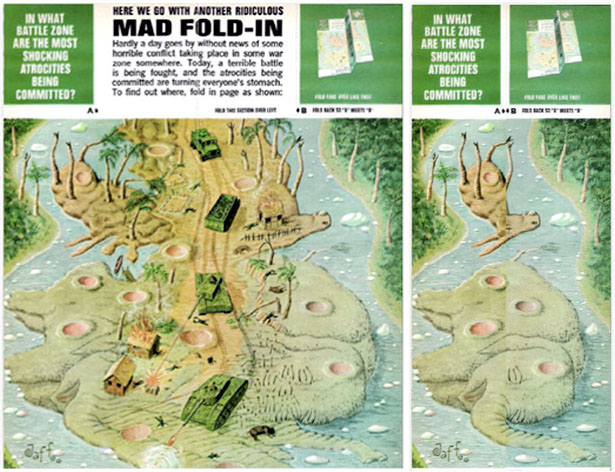 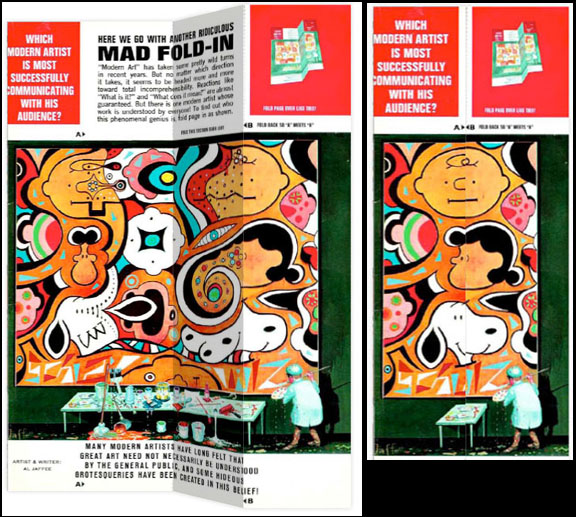 The illustration below demonstrates that the Zodiac’s Mt. Diablo map cannot be folded in the same manner as the MAD magazine “fold-in” and achieve the results described by Graysmith. 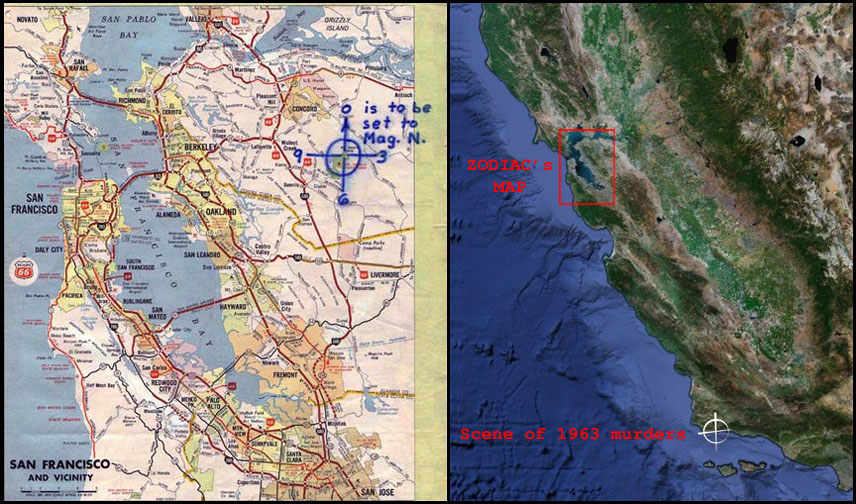 ZODIAC: A to Z : Part 7: Graysmith’s Final Grade
Robert Graysmith incorrectly identified seven of the nine relevant locations in the Zodiac case. The author was accurate regarding his placement of the pay phone used by the Zodiac after the attack at Lake Berryessa, and he correctly identified the location of the cab driver murder as the intersection of Washington and Cherry Streets in San Francisco. Graysmith was incorrect regarding the following locations:

* 4) The crime scene at Lake Berryessa

Graysmith”s claim concerning the Zodiac’s Mt. Diablo map, the scene of the suspected Zodiac murders near Santa Barbara in 1963, and the MAD magazine “fold-in” is not supported by the facts.

Robert Graysmith is known as “the expert” on the Zodiac crimes, yet his many factual errors regarding the relevant locations prove that the author’s knowledge of California geography leaves much to be desired. Graysmith claimed that he conducted ten years of research in preparation for his book Zodiac and that he toured the crime scenes with various investigators, yet his repeated failure to accurately identify most of the relevant locations casts doubt on his claims.