In the days after the shooting at Blue Rock Springs Park, surviving victim Michael Mageau told police that the sound of the gunshots seemed “muffled,” as if the gunman was using a “silencer.”

The statements given by a victim can be reliable and useful, but the combination of trauma, confusion, and other factors can often hinder a victim’s ability to recall certain aspects of the event.

The sound of a gunshot can be deafening, especially at close range, and the first shot can often cause a ringing in the ears of those within close proximity to the weapon as it discharges. Victims of a shooting often report that they did not hear the sound of the gun firing or that the sounds were somehow muted or muffled. These witnesses often report having heard the sounds of bullets passing by their ears and penetrating people or nearby objects. Bullets traveling close to the ear can create a sound that is similar to the sound of a silencer.

Victims of rapid gunfire are often mistaken when attempting to recall the number or sequence of shots fired during a crime, and frequently provide accounts that are in conflict with the known facts.

According to Mageau’s statements to police, he was sitting in the passenger seat of a parked car when a man approached from behind with a bright light. Mageau said he “heard a muffled sound” and felt a pain in his back and his neck. He then “heard some more muffled sounds” which he said resembled the sounds made by a “gun with a silencer,” and then felt more “pains in his body, his back and around his neck.” As he attempted to flee to the back seat of the car, Mageau said the gunman “kept shooting” him “again and again.”

The first shot, which caused pain in Mageau’s back and neck, entered the right side of his neck just below his right ear, traveled through his jaw and exited from his left cheek. This shot was fired from a position directly behind Mageau and to his right.

The shot, and the wound it instantly caused, would have been sufficient to diminish Mageau’s ability to hear. Mageau’s position inside the vehicle may have made it difficult for him to hear the shots fired outside the vehicle, especially after he moved to the back seat. The chaos and fear created by the sudden attack could have added to Mageau’s inability to recall every shot or aspect of the event. Mageau later admitted to reporters that his memory of the shooting was more an impression than an accurate account of the crime.

These combined factors cast doubt on Mageau’s statements concerning a “silencer,” but the statements of one witness prove that Mageau, like so many victims traumatized by violent crime, was mistaken.

George Bryant lived with his father, a groundskeeper, in a small house located in Blue Rock Springs Park, not far from the scene of the shooting. On the night of the crime, Bryant was lying in his bed, unable to sleep. According to his statements to police, he “reversed the pillow on his bed and laid on his stomach and looked out the window.” 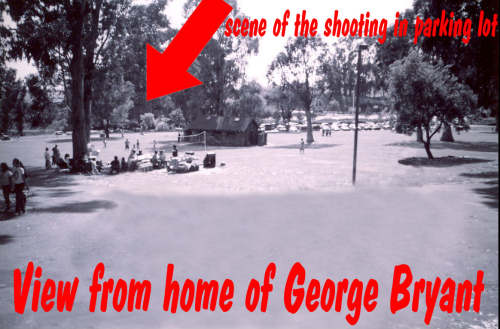 Bryant told police that he “could hear laughing and a few firecrackers but he couldn’t see anybody.” At approximately midnight, Bryant “heard what appeared to be a gunshot.” The police report notes Bryant’s comment that the gunshot“was much louder than any of the firecrackers.”

When compared with the statements given by Mageau, it seems clear that George Bryant heard the gunfire that wounded Mageau and killed Darlene Ferrin. Bryant stated that he heard gunshots at the exact time the shooting occurred. The distance between the scene of the shooting and Bryant’s bedroom window is such that he would not have been able to hear the sound of a silencer but could easily have heard the sound of a 9mm pistol firing several times, and distinguish between those sounds and the sounds of the firecrackers he had heard earlier.

Bryant said that he also heard laughter at the same time he heard the firecrackers. In his interview with police, Mageau said that three cars pulled into the parking lot shortly before the shooting occurred. Mageau said he heard “some laughing and carrying on and a few firecrackers were set off” before the three vehicles drove away.

George Bryant said he heard one gunshot, then, after a brief pause, he had heard another. He said this second shot was followed by another pause and then rapid gunfire. Mageau told police that he “heard a muffled sound” and then felt pain. He then “heard some more muffled sounds” and felt more pain. According to Mageau, the suspect then fired at Darlene several times, walked away, returned, and fired several more shots into the vehicle.

Both Bryant and Mageau provided similar accounts: A sound, a pause, a sound, a second pause, and then several more sounds.

Mageau said the sounds were muffled. Bryant said he heard what appeared to be gunshots that were louder than the same firecrackers both he and Mageau had heard. Mageau was sitting in the car with the radio playing when he was surprised, and instantly shot in the neck by a man holding a gun near Mageau’s ear. Bryant was lying on his bed in a quiet room listening to the sounds outside his window. The event left Mageau severely traumatized; Bryant calmly reported to police what he was able to remember less than 24 hours after the shooting occurred.

Mageau’s wounds, the proximity of the weapon, his position in the car, the sound of the radio and the surprise element of the attack indicate that Mageau’s ability to accurately recall the shooting is less than reliable. Bryant’s timing of the gunshots, the mention of laughter and fireworks before the shooting in corroboration with Mageau’s statements, the sequence of the shots, Bryant’s proximity to the shooting, his ability to distinguish between firecrackers and gunshots, and the fact that he was not directly involved in the shooting or confused at the time, indicate Bryant’s recall of the events of that night is more accurate than the account provided by Mageau.

Michael Mageau’s memory of muffled sounds is understandable given the circumstances, but the statements of George Bryant and the evidence indicate that the Zodiac did not use a silencer during the shooting at Blue Rock Springs Park.

Director David Fincher explained his use of a silencer in his recreation of the crime and said that the silencer was “in the police reports.” The actual reports simply repeated Mageau’s original statements that the shots sounded somehow muffled, as if the killer had used a silencer, however the same reports also stated that a witness, George Bryant had heard the shots that night. Fincher justified the use of a silencer and said that, while some witnesses had reported hearing gunshots, other witnesses had heard firecrackers which may have been mistaken for gunshots. Bryant told police that he had heard the sound of firecrackers prior the shooting, and that he then heard the sound of gun shots. With the exception of Michael Mageau, Bryant was the only witness who claimed to have heard firecrackers, and he was the only witness who said he had heard the shots. Fincher’s comments are curiously unfounded, and his attempt to justify the inclusion of the silencer may be a minor issue but serves as an example of the overall apathetic view taken when addressing the factual nature of the film.

Continue With The ZODIAC Movie: Fact vs. Fincher