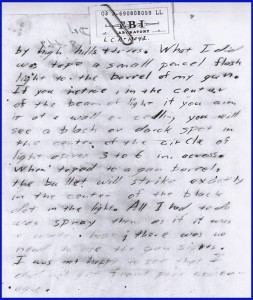 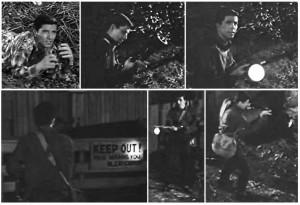 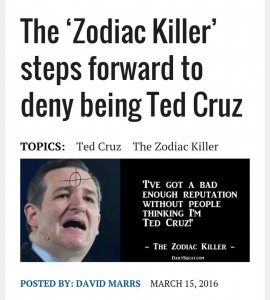 On Wednesday, March 9, 2016, Comedy Central aired an episode of The Nightly Show with Larry Wilmore which included a skit about the Zodiac killer. Host Larry Wilmore explained the origins of the recent meme that Texas Senator and Republican presidential candidate Ted Cruz is the Zodiac killer. Then, Nightly Show contributor Mike Yard appeared as a “conspiracy theorist” who presented a set of “facts” to link Cruz to the Zodiac crimes. This skit was amusing on some levels, but Yard’s “logic” was also an ironic parody of most Zodiac theorists.

When told that Ted Cruz was born in 1970 but the Zodiac crimes began in 1968, Mike Yard countered that the Obama “birther scandal” had demonstrated that birth certificates could be forgeries, a reference to the ongoing “birther” claims that President Obama was not born in the United States and is therefore an “illegitimate president.” Bizarre conspiracy theories are popular among a shockingly large percentage of the American population, but these conspiracy claims are also common among Zodiac theorists who claim that police departments and other law enforcement agencies committed the crimes, staged a hoax, covered up the crimes as part of a massive conspiracy, or worse. Yard’s Cruz/Zodiac conspiracy theory was designed to appear ridiculous from the outset but instead served as a fairly accurate portrait of the current culture of Zodiac crackpots and con men.

Yard also noted that the letters in Ted Cruz’s name could be rearranged into an anagram which included a reference to the fictional character Dracula. Using this logic, Yard then stated that Dracula was actually Vlad the Impaler, impaling was stabbing, and the Zodiac had stabbed some of his victims. Again, Yard was trying to portray a crackpot, but his portrayal was alarmingly similar to many real life Zodiac theorists who offer claims and links which often sound just as preposterous.

Yard’s “theory” concluded with a reference to Cruz’s plans to “kill” various government agencies as a link to killing. Again, Yard’s comic theory is remarkably similar to the theories offered by many Zodiac theorists who claim that their pet suspect made statements which allude to and/or condone acts of violence and murder. Some Zodiac theorists often exaggerate or distort the meaning of certain statements in order to portray suspects as sinister, dishonest or violent when the facts are not as useful in such pursuits.

Larry Wilmore noted that approximately ten percent of Florida Republican voters polled had stated that they believed Ted Cruz could be the Zodiac killer. An even larger number of polled voters said that they were not sure. Wilmore also noted that this percentage was higher than the number of Florida Republican voters who said they did not believe that one of Cruz’s opponents could be President. Unlike Yard’s theories, the numbers cited by Wilmore were not a joke— a large percentage of Florida Republicans who participated in this poll actually believed that Ted Cruz was the Zodiac killer or they were not sure. Uninformed people who get most of their “facts” from unreliable sources on the Internet are often convinced by ridiculous and unsubstantiated theories and claims. Many people are also impressed by the ridiculous and unsubstantiated theories and claims of those peddling Zodiac suspects and solutions.

Perhaps the prominent mention of the case on a popular worldwide television show could inspire some people to do a google search and learn about the real life Zodiac story, but the irony is rich because anyone who uses the Internet to find information about the Zodiac case will find many websites featuring theories and claims which are only slightly-less absurd than Mike Yard’s “Cruz/Zodiac theory.”

On April 4th, 2016, another hoax spread on the internet with the sensational headline, “Suspect Believed To Be ‘Zodiac Killer’ Arrested In Henderson Nevada.” According to the website associatedmediacoverage.com, the Zodiac killer had been identified as one Walter Gotberg, a 74 year-old man who was recently incarcerated fin Nevada or acts of domestic violence. Gotberg allegedly confessed that he was the Zodiac during conversations with another inmate. The same website states, “According to police reports, Walter Gotberg wasn’t officially listed as a suspect in the unsolved murders until laboratory results provided a match between Gotberg’s DNA and the DNA profile created by saliva found on stamps and envelopes used by the Zodiac Killer to send cryptic messages to media reporters and police.”

Associatedmediacoverage.com was the only “news” site reporting the alleged identification and arrest of Gotberg for the Zodiac crimes. There is no credible evidence that Gotberg’s DNA has been compared to the suspected “Zodiac DNA profile” obtained by the San Francisco Police Department, let alone that the test produced a match of any kind. In fact, no one has demonstrated that Walter Gotberg even exists. The website “Hoax Alert” posted an article debunking the Gotberg story as a “hoax,” and stated, “The image of the man ‘suspected’ to be the ‘Zodiac Killer’ is actually a stock image from 2014 that is regularly used on Australian bar websites.”

Many people posted links to the Gotberg hoax article on Facebook and other social media sites, spreading the story across the globe in a matter of hours. Very few people bothered to even read the article and even fewer bothered to check other media sources for confirmation of the story and its claims. Some readers on Facebook did note, “If this were true, other news agencies would be reporting it,” and some referred to the story as a “hoax.”

One Facebook user wrote, “The Zodiac is dead and buried in Mexico according to his ‘son’,” a reference to Gary Stewart, who claims that his deceased father Earl Van Best, Jr. was the Zodiac killer. Stewart’s claims first appeared in his book The Most Dangerous Animal of All, a work of “nonfiction” which was thoroughly debunked and discredited within days of its publication. Yet, Stewart’s claims continue to circulate on the internet without scrutiny or factual rebuttal. Debunked claims persist in a world where the facts are ignored in favor of entertaining nonsense. Mike Yard’s comedy sketch was only absurd and unrealistic to those who have not followed the history of the Zodiac case or the checkered careers of the many ambitious attention seekers and dedicated con men who continue to exploit the Zodiac tragedy in the quest for fame and fortune.

Learn more about the history of the “Ted Cruz is the Zodiac killer” meme at KnowYourMeme.com