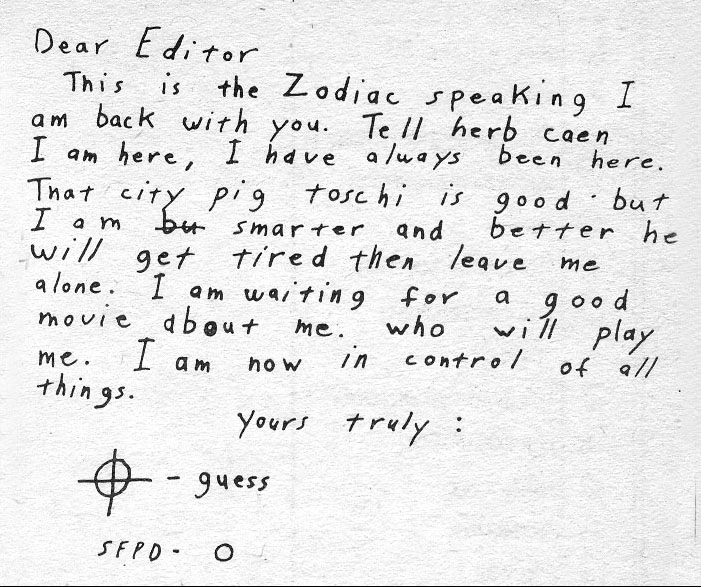 Two years after Graysmith obtained the copyright for his book, The San Francisco Chronicle received the first Zodiac letter in almost four years. Although initially deemed authentic, several handwriting experts subsequently concluded that the letter was a forgery. Graysmith claimed the letter was authentic and soon constructed an elaborate, though seriously flawed, theory to support this claim. According to Graysmith, the Zodiac used handwriting samples obtained from several different people and an enlarger/projector in order to fabricate his handwriting style.

The writing on Bryan Hartnell’s car door is unmistakably similar to the Zodiac’s handwriting, and Morrill himself concluded that the Zodiac was responsible for that message. It is unlikely, if not implausible, that the Zodiac used a projector on this occasion.

In Zodiac, Graysmith put forth the theory that Allen was the Zodiac, and, therefore, the author of the Zodiac’s many handwritten messages. He used his elaborate projector theory to explain how Allen was able to disguise his handwriting and fool document experts such as Sherwood Morrill, who was only one of several experts to conclude that Allen did not write the Zodiac letters.

Graysmith claims in one quick sentence, “Sherwood Morrill confirmed my theory.” (pg. 219). Yet he states that in 1981 he “dropped in on Sherwood Morrill “to compare handwriting of a suspect with the Zodiac’s (Zodiac, pg. 298, paperback edition). If Morrill actually believed that Graysmith’s projector theory was true, he would not continue to exclude or include suspects based on their handwriting. Graysmith seems oblivious to this blatant contradiction.

Official documents and media interviews, as well as the expert’s family, demonstrate that Morrill’s opinions never changed throughout his many years on the case. Until his death, Morrill stated that he was certain the Zodiac used his normal handwriting when writing the letters and the expert was unwavering in his belief that he could identify the killer using little more than a bank deposit slip.

Graysmith’s theories collided with modern science when the SFPD Crime Lab obtained a DNA sample from the envelope that had contained the 1978 letter and compared that sample to DNA taken from Allen shortly after his death. The samples did not match. In an article for The San Francisco Chronicle, Graysmith wondered why authorities would test a letter that everyone believed to be a forgery. An odd statement, considering that Graysmith was one of the only individuals who had been claiming that the Zodiac had actually written the 1978 letter.

Faced with handwriting and DNA evidence that excluded Allen as the author of the 1978 letter, Graysmith conveniently began to speculate that mysterious, unnamed accomplices might have written the Zodiac letters while Allen committed the actual crimes. Graysmith has quickly embraced this theory since new DNA tests on other Zodiac letters have once again excluded Allen.

By 1999, Graysmith seemed to have lost track of his multiple if ever-flexible positions on the 1978 letter. In an on-camera interview for the television program Perfect Crimes, Graysmith told viewers that “we” received a Zodiac letter on the day after Allen was released from Atascadero. Allen was released from Atascadero in August of 1977. The letter in question arrived at the offices of The San Francisco Chronicle in April of 1978.

NEXT – The Making of a Sequel