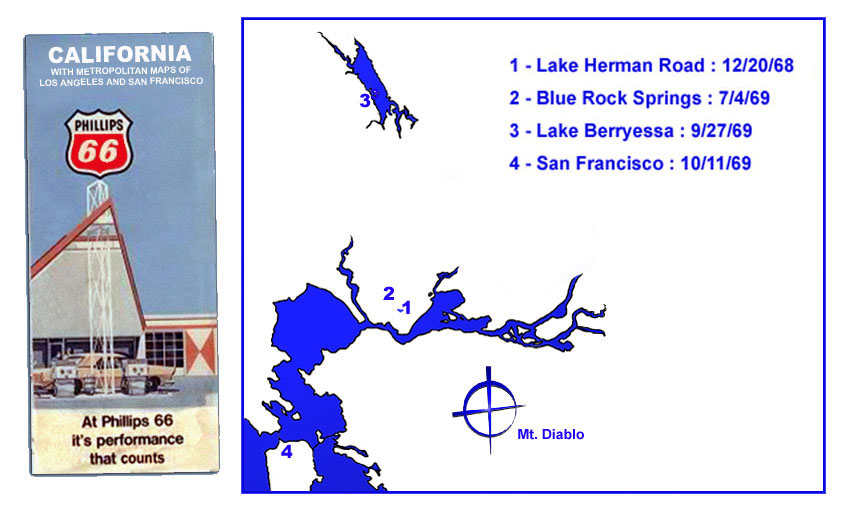 The Zodiac has been linked to many crimes by law enforcement, writers and amateur sleuths, Although the Zodiac letters alluded to many victims, the killer claimed that he was responsible for six specific crimes:

1) the murders of Betty Lou Jensen and David Faraday near Benicia, California on December 20, 1968

2) the murder of Darlene Ferrin and wounding of Michael Mageau in Vallejo, California on the night of July 4th, 1969

3) the murder of Cecelia Shepard and wounding of Bryan Hartnell at Lake Berryessa on September 27, 1969

6) the alleged abduction of Kathleen Johns near Patterson, California on March 22, 1970

While some investigators and researchers are skeptical regarding the Zodiac’s connection to the Bates murder and the Johns abduction, a majority of those who have investigated and researched the crimes believe that the Zodiac was responsible for the four other attacks. Some handwriting experts concluded that the Zodiac was responsible for some writings linked to the Bates murder but other experts disagreed. The Riverside Police Department initially proposed the idea that the Zodiac may have been responsible for the murder of Cheri Jo Bates, and the California Department of Justice concluded that a connection most likely existed between the two cases. After media reports linked the Bates and Zodiac cases, the Zodiac sent a letter which read in part, “I do have to give them credit for stumbling across my riverside activity, but they are only finding the easy ones, there are a hell of a lot more down there.” After endorsing the theory of a Zodiac/Bates connection, the Riverside Police Department issued press releases which denied that any connection existed and then pursued a suspect who reportedly knew Bates. The suspect’s DNA did not match DNA taken from hairs found in Bates’ hand. Despite the evidence which appeared to exonerate their prime suspect, the Riverside Police Department continued to deny any connection between the Zodiac and the Bates murder.

All six of these crimes remain unsolved and the Zodiac remains the most logical suspect.