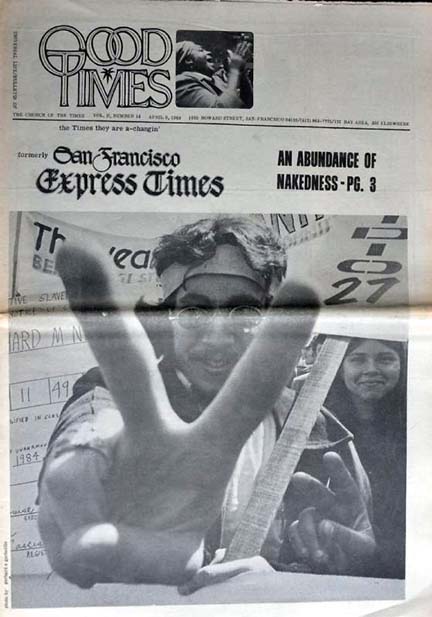 Writer and film maker Richard Gaikowski has been named as a Zodiac suspect by Tom Voigt of the website Zodiackiller.com. According to Voigt, Gaikowski allegedly assumed the role of editor for the San Francisco Express Times sometime in the spring of 1969; in April of that year, the newspaper changed its name to the San Francisco Good Times.

On his website, Voigt wrote: “At the time of his murder, the Good Times ‘switchboard’ was located only yards from the residence of Zodiac victim Paul Stine on Fell Street in San Francisco.” Voigt apparently based this claim on a paragraph which had appeared in Gaikowski’s Good Times column titled “D gaik’s short bits.” 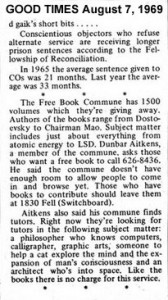 Voigt’s site also featured a Google photograph of the two locations in question with Voigt’s captions. 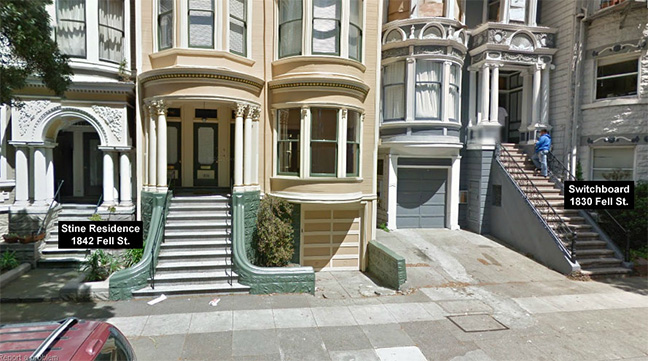 Paul Stine did live at 1842 Fell Street, and 1830 Fell Street was, in fact, the home of a switchboard. However, Voigt’s attempt to link Stine to the Good Times, and his suspect, Richard Gaikowski, appears to be based on a false assumption. A quick Google search for “1830 Fell Street” and “switchboard” yielded these results. 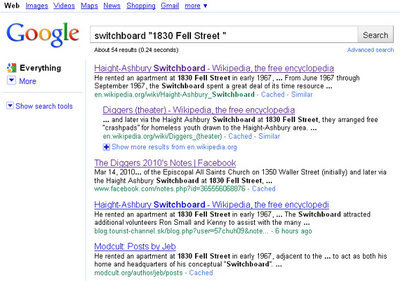 The switchboard located at 1830 Fell Street was actually the famous “Haight-Ashbury Switchboard,” a fixture of the Bay Area counter-culture in the late 1960s and 1970s. Al Rinker founded the Switchboard in 1967 and wrote this mission statement. “The Switchboard is a volunteer service designed to facilitate communication among people throughout San Francisco, and specifically to serve as an informational and referral source for the Haight-Ashbury community.” As noted on the Wikipedia page and other Internet articles, the Switchboard was quickly overwhelmed by the needs of the counter-culture community and subsequently devoted much of its resources to finding “crash pads” for wandering hippies and assisting “runaways” new to the Bay Area while dealing with worried and irate parents. The Switchboard became a focal point in the Haight-Ashbury district and a legend among those in the counter-culture movement.

The Switchboard did not serve as the switchboard for the Good Times newspaper. In fact, the Good Times had no need for a switchboard and had phones in its office at 2377 Bush Street. A page from Steal This Book by famous activist Abbie Hoffman contained the following information: 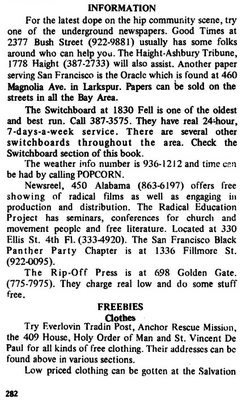 Hoffman wrote Steal This Book in 1970 and the popular anti-establishment treatise was published in 1971. The book notes the phone number of the Haight-Ashbury Switchboard as “387-3575,” the same number listed for the Haight-Ashbury switchboard in an August 1969 issue of the Good Times.

Al Rinker ran the Haight-Ashbury Switchboard until 1970 when some of his volunteers assumed control and later moved the operation to 1797 Haight, then to 1921 Hayes St. near Ashbury, and finally to 1539 Haight St. The Switchboard continued to offer services to the citizens of the Bay Area throughout the 1970s and into the 1980s and finally closed in 1986.

In one of his many writings from the late 1980s, Blaine Blaine, Gaikowsk’s only accuser and Voigt’s chief informant, noted the proximity of the Switchboard to the residence of Zodiac victim Paul Stine, writing, On Stine: Did you know Stine lived either in or near the same building where the old Haight Ashbury switchboard was located on Fell Street? The Switchboard then use to sell the GOOD TIMES underground newspaper and Gaikowski used to, with Chris Robeson, deliver them there.

Voigt posted a clipping from the Good Times which read:

“The Haight-Ashbury switchboard would like to thank the Good Times’ readers for coming up with enough bread for us to pay the bills.”

“Later, Allen attempted to use a deceased elderly neighbor as an alibi, claiming this neighbor, William White, had seen Allen the afternoon of the Berryessa attack and that the two had a conversation. (At this time another William White, a ranger from Napa County, was all over the news as a spokesman on the Berryessa attack.) Neighbor White died within a couple of weeks of this alleged encounter. His birthday was Dec. 20.”

Voigt recently claimed that he possessed almost one hundred letters written by Arthur Leigh Allen in which Allen had confessed that he was the Zodiac and provided information known only to the killer. “In several letters he confessed to being the Zodiac, and gave details only the killer would know; those letters I have sent to the proper authorities… Written from the mental hospital in 1975, 1976 and 1977, I had a hundred of these letters. Most were passed along to law enforcement recently, and America’s Most Wanted has a show coming out.” Voigt’s ongoing promotion of Richard Gaikowski and Richard Marshall as viable suspects seems strange if Voigt did, indeed, possess letters in which Allen not only confessed but provided information known only to the Zodiac. On Thursday, October 07, 2010 9:52:46 AM, Voigt presented a new theory regarding Marshall, “Was Marshall the Zodiac? Were he and Gaikowski a team?” [Read the original posting.] Voigt posted this veiled accusation two years after he had declared that Richard Marshall had been officially cleared as a Zodiac suspect with the help of Voigt himself. [The excerpt below can be found in the UPDATE section of Voigt’s website known as The NEWS CENTER.]

Sept. 6, 2008) After more than 30 years of scrutiny, Rick Marshall has finally been dismissed as a Zodiac suspect…and Zodiackiller.com played a huge part.

Here’s how it went down:

It all started a couple of months ago when I received a phone tip (415 267-4818) from a woman who worked at a care facility in the Sacramento (Cal.) area. She told me that Marshall was a patient where she worked, and that he had spoken about the Zodiac case. She found him to be extremely suspicious and was not sure what to do. Thinking Marshall might finally be ready to talk due to his advanced age and deteriorating health, I contacted my sources at the Napa County Sheriff’s Dept., the agency that originally investigated Marshall back in the 1970s. Two detectives made the trek to Sacramento and spent a significant amount of time interviewing Marshall. I have yet to find if DNA testing was involved, but whatever data was gleened was enough for investigators to finally dismiss Marshall as a viable Zodiac suspect after more than three decades.

Many observers criticized Voigt’s attempts to resurrect Marshall as a suspect with his posting “Was Marshall the Zodiac? Were he and Gaikowski a team?” On October 18th, 2010, Voigt posted the following response on his Twitter page: “Ummm…when did I accuse Rick Marshall of anything? Trolls gonna troll.”

Echoing his attempts to create a link between suspect Arthur Leigh Allen and victim Darlene Ferrin, Voigt also implies that the birthday and residence of Gaikowski’s relative constitutes a link between Gaikowski and Zodiac victim Paul Stine.

Voigt is suggesting that Richard Gaikowski and/or his associates at the Good Times newspaper / commune were directly linked to the switchboard address on Fell Street next to Stine’s residence. Based on this claimed link, Voigt further claims that Gaikowski and/or his associates often traveled to the switchboard address, thereby placing him near Stine. The implication is that Gaikowski, as the Zodiac, came into contact with Stine and then decided to kill him. Voigt further implies that Gaikowski may have selected Stine as his victim and then killed Stine on Washington Street because Gaikowski’s cousin lived on Washington Street. The allegations are based on trivia regarding the date of birth and address of Gaikowski’s cousin and Voigt’s theorized yet unsubstantiated link between the Good Times/Gaikowski and the switchboard address.

Voigt’s entire presentation seems designed to mislead and manipulate a naive and gullible audience. Voigt aims to convince the public that Richard Gaikowski was a murderous madman responsible for multiple killings and a campaign of terror which lasted several years. Voigt assumes that the public will accept his simplistic and misleading propaganda as legitimate substitutes for good reason to accuse a man of murder. Voigt’s desperate and dubious attempts to create links between Gaikowski and Zodiac victims betray Voigt’s true motives and demonstrate that he is ready and willing to ignore the facts in his quest to convict Gaikowski in the court of public opinion.

In April 2008, Tom Voigt claimed that the Good Times newspaper refererred to the Haight-Ashbury switchboard as “the Good Times switchboard.” The new year 2011 has arrived, and Voigt still has not presented any credible evidence to support this claim. Voigt declared that he will not tap into that collection of “examples galore” in order to vindicate himself until he receives an apology from those who noted his failure to provide that evidence during the last two and a half years.

Anyone making claims regarding an unsolved murder case has a moral and ethical obligation to present the facts which support their claims. Tom Voigt claimed that the Good Times newspaper referred to the Haight-Ashbury switchboard as “the Good Times switchboard” yet he did not provide any evidence to support this claim. Voigt wrote, “I have been accused of lying when I said — back in April 2008 — that the Good Times newspaper referred to the Haight switchboard as ‘the Good Times switchboard.’ I hope nobody still has doubts as to my honesty.” The issues at hand are the facts concerning an unsolved murder case and the evidence used to accuse someone of murder, not Tom Voigt or his hurt feelings. If Voigt had acted as any responsible person would and simply posted the evidence to support his claims then no one would have reason or cause to question his honesty and motives regarding this matter. Anyone who was truly concerned about being perceived as dishonest would provide the evidence which supported their claims rather than withhold that evidence until he received an apology from those who criticized him for failing to provide that evidence in the first place. Most people who were offended at the suggestion that they had made false statements would willingly provide the evidence which proved otherwise, especially if they possessed “examples galore” of that evidence. Voigt wrote, “I have examples galore of the “Good Times” newspaper referring to the Fell Street switchboard as the “Good Times” switchboard…” Voigt then wrote, “While I didn’t purchase the issue where I saw that reference, I’m sure I’ll get my hands on it again one day.” In the first version, Voigt clearly states that he has many examples in his possession and, in the second version, he implies that he had only seen one example. Anyone attempting to reconcile these two statements would be justifiably confused.